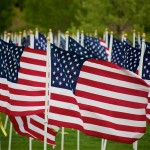 This evening on Facebook my attention was directed to an article written by a friend of a friend all about why he no longer would pledge allegiance to the flag of the US.

While I appreciate both the fortitude required to publish this article and the thoughts therein, I disagree with several of the assertions.

I feel compelled to share a few of my thoughts on the subject:

The US flag is the single most identifiable icon of our nation – just as the hammer and sickle from the USSR of the 80’s, the Union Jack of Great Britain, the tri-colors of France, etc. When I pledge allegiance to the flag of the US, I’m not pledging allegiance to a piece of cloth, but rather to the ideals (indeed, the republic) for which it stands (in particular, as it has been laid out by our founding fathers). I think that part of the problem comes from the phrasing – everyone follows the same rhythm and cadence when reciting the pledge, putting a comma or pause after the word flag – as though to single it out. It’s not about the flag. It’s about our freedoms, liberty, and opportunity.

I do agree with some of the comments regarding how poorly things are run now – especially with respect to corporate involvement in legislation and corruption at all levels of government, BUT – the poor state of affairs is not what I’m pledging allegiance to. I’m pledging to align myself with the ideals of one nation under God, set up in separate but indivisible states, dedicated to the ideals of both liberty and justice to every citizen.

At the further risk of sounding like I’ve been drinking too much US cool-aid, I believe that Francis Scott Key was divinely inspired when he penned the lines to the single most recognizable song in the US: Our National Anthem. Many people sing it or hum it at sporting events and never really stop to think about what it is describing, or what it means. After 3 heart-achingly beautiful verses all about our national symbol of freedom and the toil that has been endured in forming the nation it represents, he sums things up thus:

O thus be it ever, when freemen shall stand
Between their loved home and the war’s desolation.
Blest with vict’ry and peace, may the Heav’n rescued land
Praise the Power that hath made and preserved us a nation!
Then conquer we must, when our cause it is just,
And this be our motto: “In God is our trust.”
And the star-spangled banner in triumph shall wave
O’er the land of the free and the home of the brave!

I encourage you to take a few moments and go read the history and full text of all the verses of The Star Spangled Banner (especially the 5th verse that was popular during the time of the civil war), and see if you still have doubts about where your allegiance should lie.